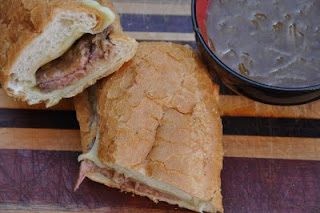 Whenever we celebrate the kids' birthdays, they get to request what food they want to eat at their party. Two favorites are "smoke roasted" tri-tip and French onion soup. We had a revelation while watching a show on The Cooking Channel called Eat Street. A food truck called Creme de la Creme used French onion soup as the dipper for a French dip sandwich. The idea was fantastic! I dragged out our ancient Weber grill and cooked a couple of tri-tips using hickory wood chips for smoke. April made her sought after French onion soup. We sliced the meat thin and piled it on a soft roll that had been placed under the broiler with Swiss cheese. We stole some onions from the soup and added that to the sandwich. A cup of soup on the side for dipping and Voila! A marriage of two recipes. I now pronounce you soup and sandwich.
Posted by Greg at 11:40 AM

What a great idea! Your kids are geniuses! Care to share April's sought-after onion soup?

Zoomie- April uses Anne Burrell's recipe to start. This time she used a light turkey stock I made instead of beef stock. There is a little "something-something" else but she holds back.I may have to bribe her ;)

Why do people guard recipes?

cookiecrumb- I can't speak for everyone but in this case she likes to piss me off ;)
The truth be told she makes it a little different each time. This time she had no herbs so she left them out. I think the long slow cooking of the onions is the secret.

I like the addition of Swiss Cheese. Ancient Weber? Shame for neglecting such an important tool.

Chilebrown- The Weber is a workhorse! I really can't remember when I bought it. It had wood handles if that dates it at all. I just clean it out and it works like a charm.

I totally get that the recipes might be different each time. Kiss to April.