No Polictics Just a Memory 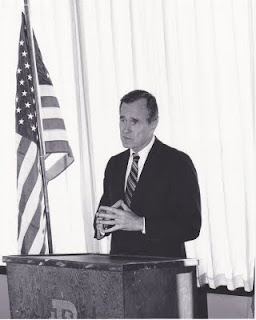 I know that this blog is primarily a food blog, but the header also says people and places. With that in mind, I will go a little off the beaten track here.

I recently watched a PBS special called The Presidents Photographer, by National Geographic. It follows the day to day job of President Obama's photographer, Pete Souza. In it, Mr Souza mentions the "hand shake" photos that are a staple of his job. It brought back a memory of when I was hired by a local politico to take some head shots of him for advertising. Trust me it did not pay much. When George H.W. Bush (V.P. at the time) decided to stump for the politico I was asked to be the "official" photographer for the event.

The event took place at Dominic's Restaurant in San Rafael. (It is now the home to The Seafood Peddler. There we go, a food reference after all.) I had to provide some information to the secret service and go through a security checkpoint. I received a "lapel pin" that allowed me access. I must admit the sound of helicopters and sirens made me a little nervous. The snipers on the roof and the agents with earphones also fired up my adrenaline a bit. Just then one of agents said, "if you want to get your shots come here now!" The Vice President walked calmly through the door with a big smile. Handshakes and smiles filled the room. I had two cameras and took pictures as fast as the flashes would recycle. In those days the maximum shots on a roll of film was 36. I had to juggle my equipment and try to reload film. It was all a bit of a blur but the results ended up just fine. I sold a bunch of handshake shots and made some money. I also sold some photos to the local press because their photographers were not allowed access. Who knows, if my politico had won the election where would I be now? The photo above was one of my favorites. My new printer/scanner allowed me to format the photo to digital. Next blog back to the food.

That must have been an exciting day, if a little stressful! Hard to imagine, with all that security, how that couple that "crashed" the White House could get in.

Zoomie-It was exciting. I know I would not try to crash a party with all that security.

I think that is very Kool. Your photography may or may not have helped shape history.

Chilebrown- I just documented a moment in time. Less than a quarter second.

Want To Increase Your ClickBank Banner Traffic And Commissions?